Hey, I'm Dan! I invest in early-stage startups at Madrona and write a weekly newsletter called the DL

What Dan's Talking About
Top DL articles of 2019
Seattle Unicorns
Disrupt yo self! 💥
How much do people at tech companies make?

Investing in the Sounders: Q & A with Terry Myerson 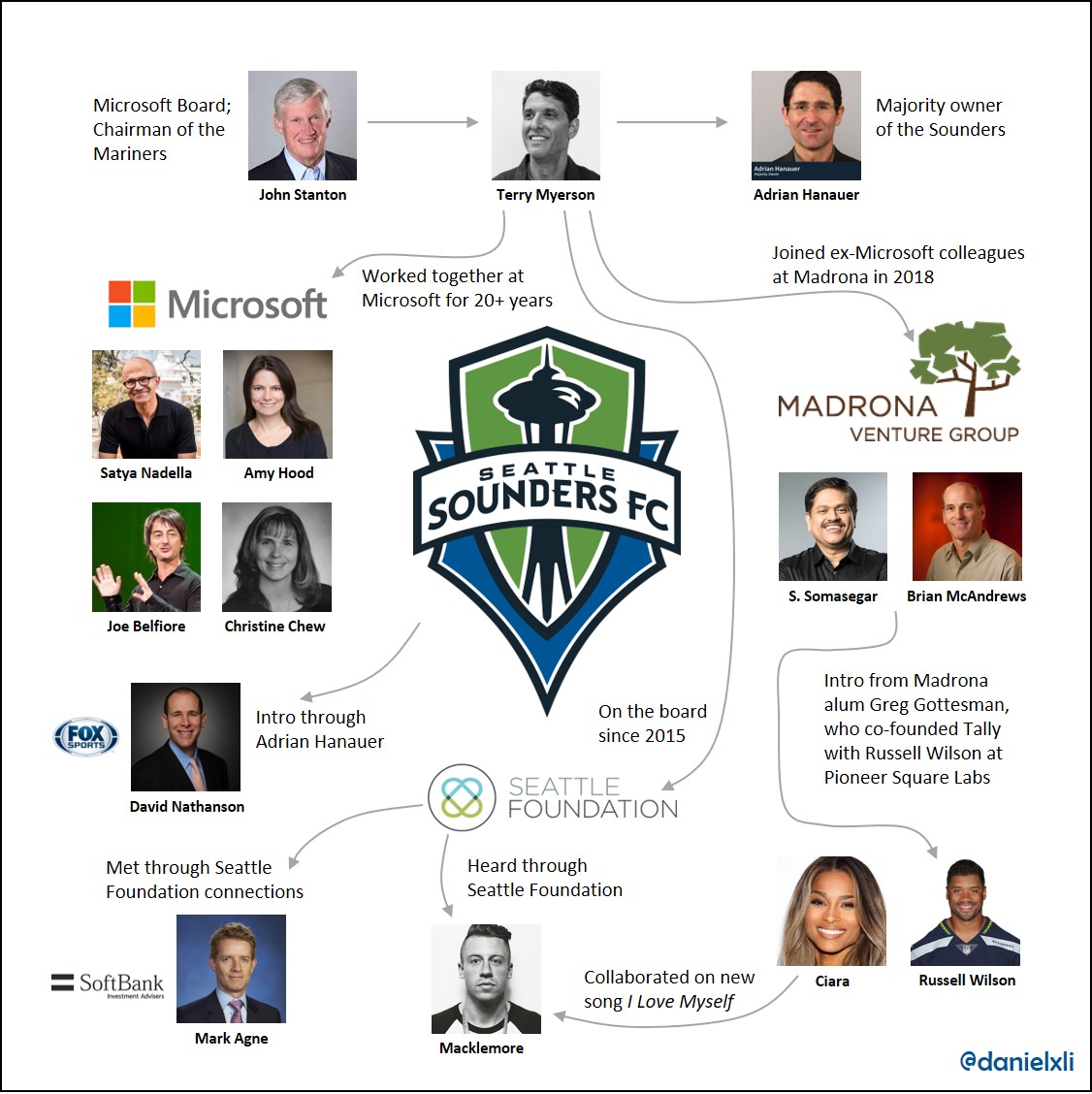 Sports teams are 🔥! Every NFL, NBA, and MLB franchise is now worth at least $1B, and there are 52 teams across all sports worth at least $2B, up from one (Manchester United), in 2012.

Last week the Sounders announced 11 new families are joining the team ownership group, and Terry Myerson, who was the driving force behind the deal, wrote a great blog post on the 15 month long deal process.

The graphic above dives into the Seattle networks that pulled this all together (I love the loop from Microsoft, to Madrona, to PSL/Tally, to Macklemore, and back to the Seattle Foundation), and here is a Q & A with Terry on the deal process:

How many people did you meet with to find the 11 families that ended up investing? Were they all warm intros?

They were all introductions. There was no cold calling 😊

I had over 100 discussions, mostly on the phone, some over coffee or breakfast or lunch, some at half time of a Sounders game, and many on the sidelines of Eastside FC or ISC Gunners soccer games.

What was the biggest surprise during the investment process?

Last September, I had a bike trip planned in Laos and Vietnam. I thought the deal might close while I was gone, so I rented a satellite phone and carried it everywhere on the trip. The deal ultimately closed 9 months later. There were more moving parts than I ever could have imagined when we started.

Sports team valuations seem to be skyrocketing over the last few years. What type of returns do people who invest in teams expect?

We didn’t invest with a specific return in mind. We all felt it was important that the Sounders be owned in Seattle.

That being said, team valuations are typically driven by viewership which drives media rights. Soccer in the US has not had the highest viewership, but I think there is great potential for this to change for several reasons (youth playing trends, increased diversity in our community), but primarily because soccer is just awesome!

What’s been your best investment ever? Favorite investment?

Best investment – Starting a company, Intersé Corporation, which Microsoft acquired in 1997. Starting a company with friends, leading it through all the twists and turns of a startup, and then ultimately being successful with it is an amazing experience I’d recommend to anyone with an entrepreneurial itch.

Can you get some DL subscribers into the owners’ box?

I’m sure we’ll be hosting many Madrona entrepreneurs there over time!

Hey, I'm Dan! I invest in early-stage startups at Madrona and write a weekly newsletter called the DL

What Dan's Talking About
Top DL articles of 2019
Seattle Unicorns
Disrupt yo self! 💥
How much do people at tech companies make?